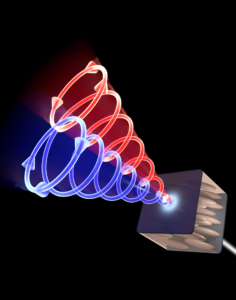 Spin-orbit coupling gives rise to many different interesting phenomena. We focus on the spin-orbit interactions of light in LC optical cavities. This is extremely interesting system because of the tuning, and thus the ability to smoothly change parameters describing the structure, as a dielectric tensor. The rotation of a dielectric tensor leads to a change of TE-TM splitting. This makes LC cavity an interesting system to study optical spin Hall effect (OSHE).

We conducted optical measurements of reflectivity and transmission spectra in real and reciprocal space, which allowed us to examine the tunable optical spin Hall effect. In addition, we observed the optical counterpart of Rashba-Dresselhaus effect known from solid-state physics. In the studied system, the spin-orbital interaction for light is observed in the form of oppositely circularly polarized parabolic cavity photon dispersions. For the appropriate angle of rotation, corresponding to the intersection of modes with opposite parity, the cavity modes lose their original linear polarization and create two not concentric, counter-circularly polarized, parabolic dispersion relations.