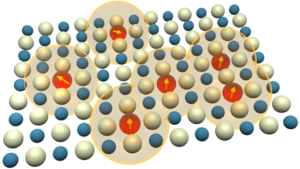 Exciton-polaritons are quasi-particles formed by strong coupling of excitons in a quantum well and photons confined in a optical cavity. Their bosonic character allows the formation of a macroscopic quantum state: a non-equilibrium Bose-Einstein condensate. The semi-magnetic polaritons studied in our group form a unique class among polaritons.

The magneto-optical effects in semimagnetic polaritons are especially strong due to magnetic ions, such as Mn2+ incorporated into crystal lattice. In external magnetic field magnetic moments of these ions orient and through s,p-d interactions act on charge carriers as an additional effective magnetic field. In these structures, we’ve demonstrated giant Zeeman splitting, spin Meissner effect and the formation of circularly polarized polariton condensates.